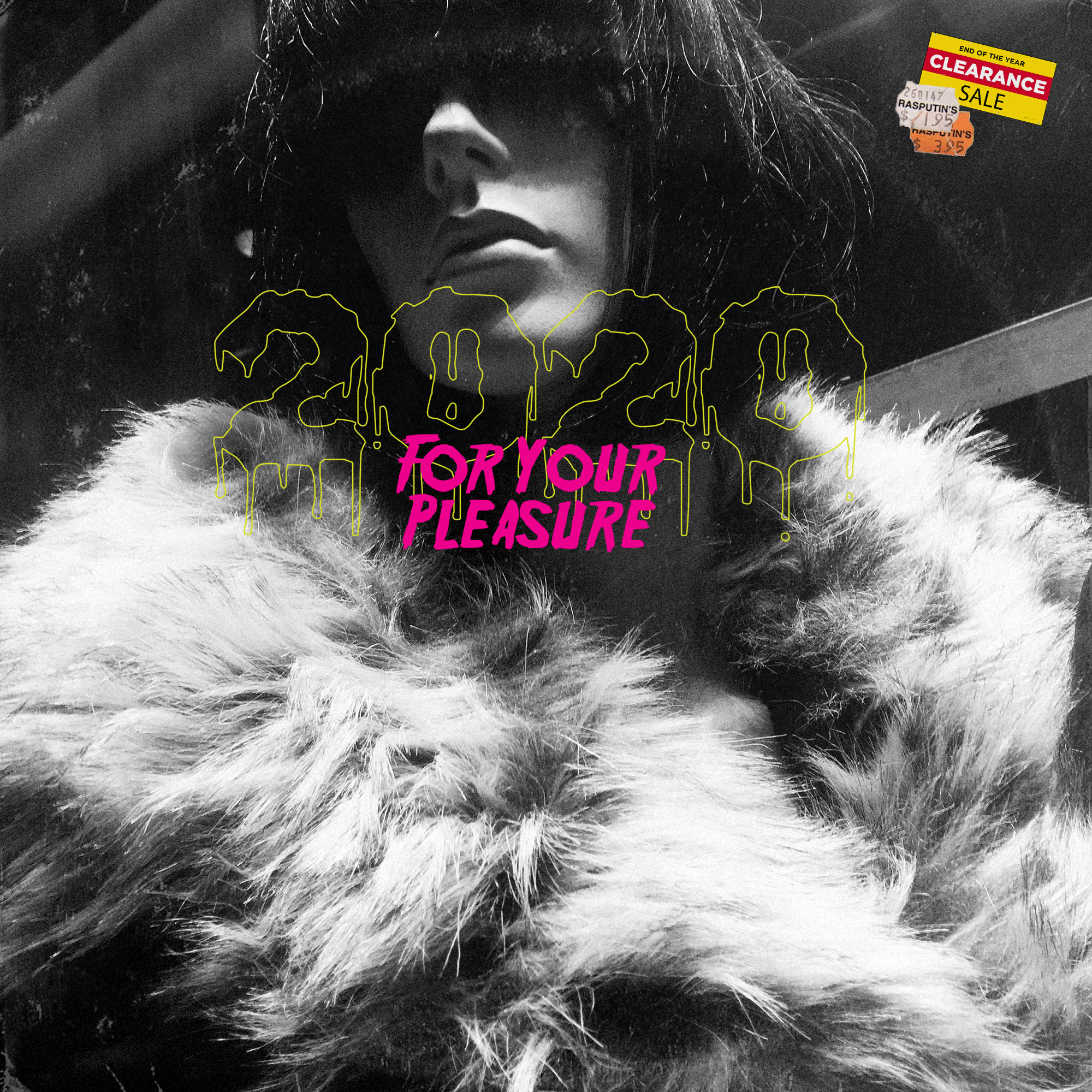 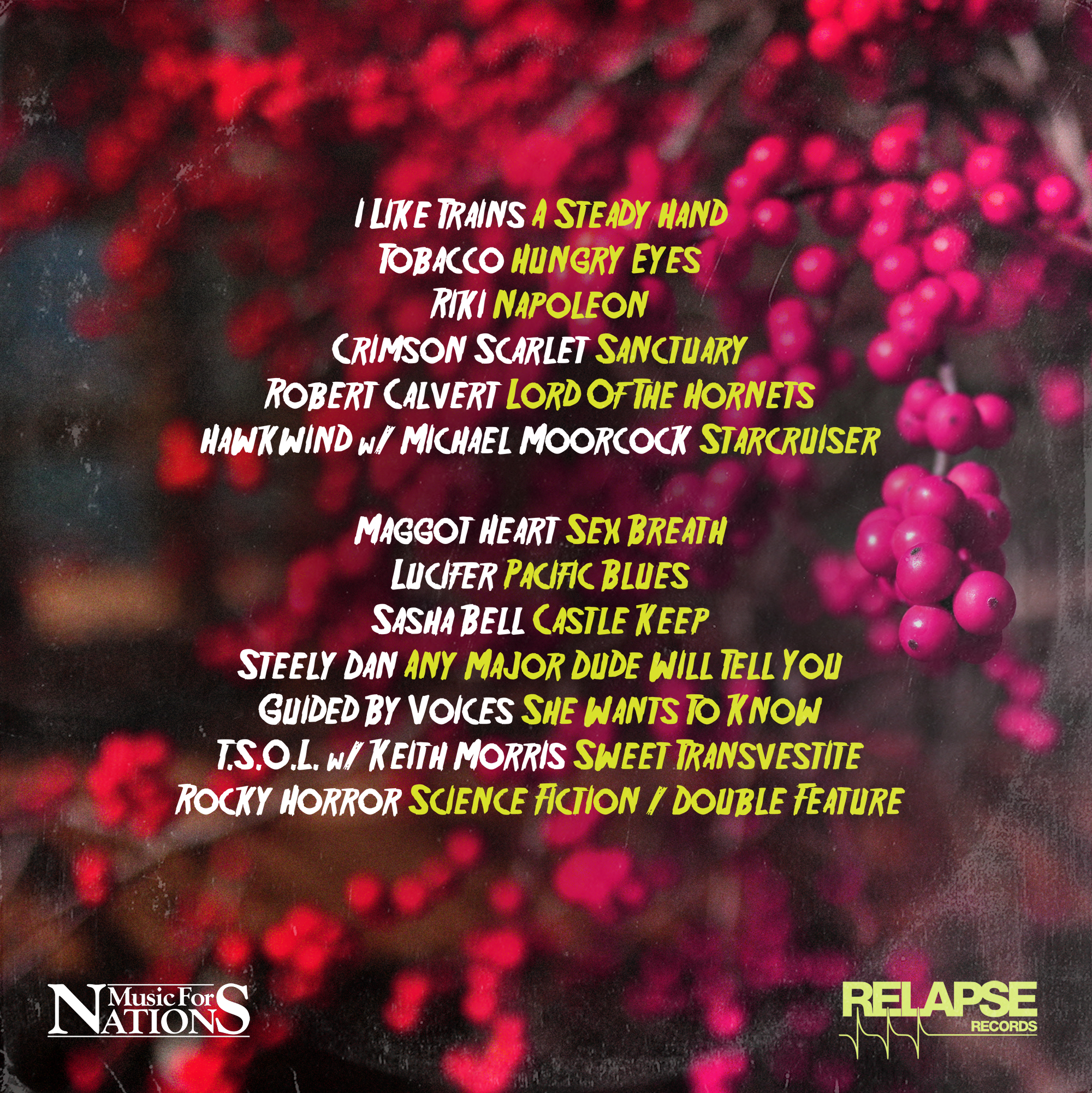 Comrades! THBBFT! BLARGH! ACK! Let the iridescent green dripping type and the hot magenta Friday the 13th titling of 2020’s For Your Pleasure stand in for adding even more word-things to the flaming pile of exasperated execration of this year’s collective dumpster fire.

Apparently quite late to the I Like Trains parade, I immediately fell into line 10 seconds into “A Steady Hand”, the lead track from this year’s Kompromat. Sometimes I groove spasmodically while lead singer David Martin seemingly channels the full sizzling charge of our current dystopia, and sometimes he reminds me of Peter Cook fronting Drimble Wedge and the Vegetations and I just swoon. See, look — swoon……

TOBACCO’s melted cover of Eric Carmen’s “Hungry Eyes” is the musical equivalent of American cheese – a guilty but irredeemably synthetic pleasure directly out of its original cellophane wrapper, yet sublime when melted at high heat. Fucking yummy.

Riki’s “Napoleon” has been lodged at #1 atop my daily Dinner Cookin’ Tube Rippin’ Hot Hot Hot Singles Chart since February. The whole record is a killer – the work of Bay Area musician Niff Nawor; a little poking around led back to her earlier band, the deathrock & hardcore hybrid Crimson Scarlet – an exhilarating revelation in two overgrown and often moribund genres.

Remember that part when Gandalf, after exhorting our shredded heroes to “Look to my coming, at first light, on the fifth day. At dawn, look to the East,” shows up atop that crest bathed in glowing magical light? That’s how I greeted Joe Banks’ sweeping history of the mighty Hawkwind: Days of the Underground (see more, with more unwieldy and over-egged metaphors, below) Besides being more fun to read than a barrel full of psychedelic monkeys, it led to fresh re-appraisals of singer/poet Robert Calvert (far more than a quirk, Calvert was a lost talent of significant gifts) and stranger-than-fictional discoveries like “Starcruiser” – a Roxy Music-esque collaboration with legendary sci-fi author Michael Moorcock. Joy, joy, joy in every note & blurt. (And joy, simple joy is one of the most endearing aspects of the book – because for all the general insanity, mental breakdowns, breaks ups, busts and the usual rock malarkey these big-hearted bohos had a fucking blast together…. with scarcely a bad word to say about one another, bound together by an overall bonhomie that I found infectious and most welcome)

The opposite holds for Maggot Heart’s Linnea Olsson and Lucifer’s Johanna Sadonis. Once blood sisters in the short-lived but almighty Oath, they fell out utterly, mysteriously, and permanently. Olsson is a feral Cuisinart, chopping and swirling bits of Siouxsie, early Pixies, and Christian Death in with the usual metallic soffritto. Abrasive yet bracing. Sadonis is an altogether kitschier, plunging & flying V, leather tasseled affair — equal parts Sabbath and Stevie Nicks. Being good and good for a laugh is no small thing these days.

Essex Greener Sasha Bell’s solo records are few and considerably far between (Your humble servant had a hand in releasing the last one, under the bullseye name Finishing School in 2003.) I missed last years release of Love is Alright and was delighted to catch-up — there’s an foxy, aristocratic burr to Bell’s voice that I’ve been besotted with for decades – imagine, if you will, Katherine Hepburn fronting a paisley soft-psych band. I do, and I dig!

A couple times a year I make a concerted effort to crack open canonical rock classics that have proven impenetrable or unappealing. Often I trudge away unconverted – sorry Nebraska, later Rumors, get thee behind me Queen – but this year I finally yielded to Steely Dan. Too many smart people kept on and on about how fucking smart this shit really was – high art and merry pranksterism flying under AM radio camouflage, etc… and although I still get the gas face from my skeptical wife when she comes home and I’m vibing on “Rikki,” I for one have finally had a change of heart, and when I’m in the mood for something shiny and smooth, I don’t wanna call nobody else. I wanna call the Dan.

In a year when ecstatic communion with like-minded folk at live shows was sucked into the void, I give thanks for our never-fading captain Robert Pollard. For me Guided By Voices fanhood is a sustaining & nourishing joy. Even though I lost the bead on the river of releases years ago, remaining part of a fervent, active fan community sweetens my soul. And this year’s single release of “She Wants to Know,” was, for us fans, nothing less than a legit miracle – a stomping remake of a beloved song from the long-disowned debut 1986 EP (apparently due to sterile sound and excessive REM sound-a-like-ism, according to Pollard.) When this tune was deployed live in the back half of ’19 people went. fucking. bonkers. Just when we needed it most, we can do the same in our living rooms, air jamming and high-kicking, until once again the clubs are open!

So, I turned 50 this year, which inspired no small bit of solipsistic navel gazing. I was 16 in ’86 when punk changed my life forever. Two books came along this year that managed to capture the some of the novel exhilaration of that time and scene: Texas is the Reason: The Mavericks of Lone Star Punk, by Pat Blashill (which may be, along with We Got Power!, the best photographic distillation of what it all felt like then,) and Mutations: The Many Strange Faces of Hardcore Punk by Sam McPheeters (who came up in the same Albany, NY hardcore scene as I did).

Along the way McPheeters makes an observation that bowled me over with its retrospective clarity: “Not many people realize the power and rarity of a self generated, self reliant network – many people involved in 80s hardcore describe it as the most positive experience of their lives.” He’s totally right – so much of what I value in myself, and in life, was seared into me in those salad days – an everlasting personal, cultural and political rewiring, and a channel forever open to the power of art to shape & sustain a life. So it seemed like a gift from the uncanny when Jack Grisham & TSOL dropped a one-off cover of Rocky Horror’s “Sweet Transvestite” this year, featuring Keith Morris of the Circle Jerks & OFF!. Two artists I’ve loved for nearly 35 years covering a song I’ve adored for just as long; still pals, still making tunes, and at the peak of their powers. Joy joy joy.

As part of my Golden Jubilee celebrations I subjected two willing dear pals to a 3 hour and 45 minute mix of tunes covering my entire rock & roll life, starting in around 1980 when I taped Ozzy’s “Mr. Crowley” by pressing my dad’s mono cassette recorder up to a GE Superadio II. I leave you with just one selection – again, from Rocky Horror — “Science Fiction Double Feature” — my personal “Waterloo Sunset,” to my ears and mind the most beautiful song in the English language. Joy.