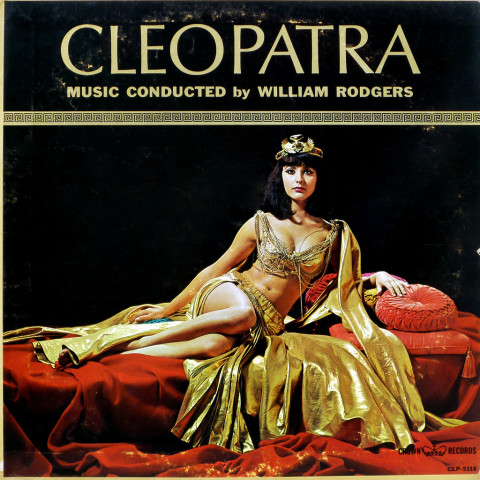 Batshit. Pardon the vernacular, but it’s really the only way to describe Algernon Charles Swinburne’s poem Cleopatra. What ridiculous swoops of melodrama. Overripe to the point of sugary bursting. It begins with a vivid litany of Cleopatra’s superlative qualities. It quickly unravels into a hysterical parade of phantasmagoric noodling – histories crushed under her eyelids, something about molten heaven drier than sand, and culminating in a psychedelic apocalypse. Or something. But of course it’s all a dream, but the dream of a lurid goddess, laughing with a red sweet mouth of wine, with history itself under her sway. Superb stuff, enjoy! (By the way Swinburne’s story is riveting and well, well worth reading.)

HER mouth is fragrant as a vine,
A vine with birds in all its boughs;
Serpent and scarab for a sign
Between the beauty of her brows
And the amorous deep lids divine.

Her great curled hair makes luminous
Her cheeks, her lifted throat and chin.
Shall she not have the hearts of us
To shatter, and the loves therein
To shred between her fingers thus?

Small ruined broken strays of light,
Pearl after pearl she shreds them through
Her long sweet sleepy fingers, white
As any pearl’s heart veined with blue,
And soft as dew on a soft night.

As if the very eyes of love
Shone through her shutting lids, and stole
The slow looks of a snake or dove;
As if her lips absorbed the whole
Of love, her soul the soul thereof.

Lost, all the lordly pearls that were
Wrung from the sea’s heart, from the green
Coasts of the Indian gulf-river;
Lost, all the loves of the world—so keen
Towards this queen for love of her.

You see against her throat the small
Sharp glittering shadows of them shake;
And through her hair the imperial
Curled likeness of the river snake,
Whose bite shall make an end of all.

Through the scales sheathing him like wings,
Through hieroglyphs of gold and gem,
The strong sense of her beauty stings,
Like a keen pulse of love in them,
A running flame through all his rings.

Under those low large lids of hers
She hath the histories of all time;
The fruit of foliage-stricken years;
The old seasons with their heavy chime
That leaves its rhyme in the world’s ears.

She sees the hand of death made bare,
The ravelled riddle of the skies,
The faces faded that were fair,
The mouths made speechless that were wise,
The hollow eyes and dusty hair;

The shape and shadow of mystic things,
Things that fate fashions or forbids;
The staff of time-forgotten Kings
Whose name falls off the Pyramids,
Their coffin-lids and grave-clothings;

Dank dregs, the scum of pool or clod,
God-spawn of lizard-footed clans,
And those dog-headed hulks that trod
Swart necks of the old Egyptians,
Raw draughts of man’s beginning God;

The poised hawk, quivering ere he smote,
With plume-like gems on breast and back;
The asps and water-worms afloat
Between the rush-flowers moist and slack;
The cat’s warm black bright rising throat.

The purple days of drouth expand
Like a scroll opened out again;
The molten heaven drier than sand,
The hot red heaven without rain,
Sheds iron pain on the empty land.

All Egypt aches in the sun’s sight;
The lips of men are harsh for drouth,
The fierce air leaves their cheeks burnt white,
Charred by the bitter blowing south,
Whose dusty mouth is sharp to bite.

All this she dreams of, and her eyes
Are wrought after the sense hereof.
There is no heart in her for sighs;
The face of her is more than love—
A name above the Ptolemies.

Her great grave beauty covers her
As that sleek spoil beneath her feet
Clothed once the anointed soothsayer;
The hallowing is gone forth from it
Now, made unmeet for priests to wear.

She treads on gods and god-like things,
On fate and fear and life and death,
On hate that cleaves and love that clings,
All that is brought forth of man’s breath
And perisheth with what it brings.

She holds her future close, her lips
Hold fast the face of things to be;
Actium, and sound of war that dips
Down the blown valleys of the sea,
Far sails that flee, and storms of ships;

The laughing red sweet mouth of wine
At ending of life’s festival;
That spice of cerecloths, and the fine
White bitter dust funereal
Sprinkled on all things for a sign;

His face, who was and was not he,
In whom, alive, her life abode;
The end, when she gained heart to see
Those ways of death wherein she trod,
Goddess by god, with Antony.